Yelp is Not a Good Marketing Tool for Your Business

For years Yelp salespeople have called periodically to get Spigot on board with advertising through their platform. These people have all been brushed aside. We have never had a serious budget for advertising, and Yelp always seemed like the last place I’d want to spend ad dollars. Who searches Yelp for a web designer? Who searches Yelp for anything?

Like most of us, I get sales calls quite often. And while I rarely have the time, I sometimes like to bait these calls out for my own enjoyment. Keeping a scammy sales person on the phone for as long as possible means they have less time to be calling someone else. And so it was one December morning just before Christmas I found myself on the phone with a Yelp salesperson – drawing out the call with my wit and persistence. In the end I was the one who’d been had. Enamored by the promise of riches, and a $300 advertising credit, Spigot was signed up for an Enhanced Profile Yelp Advertising campaign.

No big deal though. If watched closely, the campaign should easily be turned off before any actual charges were made, right? And there certainly was no reason to be suspicious that the super friendly sales guy suddenly had to go the moment he closed the deal, right?

For the first two weeks the ad produced zero clicks. With ‘Ad Spend’ at $0.00 we were well on our way to a dysfunctional, worthless marketing campaign and in no danger of going over the $300 promotion. Rather than simply turning off the campaign, I assumed the ads don’t work and stopped checking in. This ad could go until June without a charge. Who the heck searches Yelp for web designers?

About mid-January after an ‘oh-shit’ moment I logged into Yelp to find that five (5) people had clicked on the ad! Wow, 5 clicks! Strange I didn’t actually hear from anyone. The ‘Ad Spend’ now read $300. If we do a quick math on that… five into three hundred is… six, carry the zero… sixty… $60 per click. SIXTY DOLLARS PER CLICK. 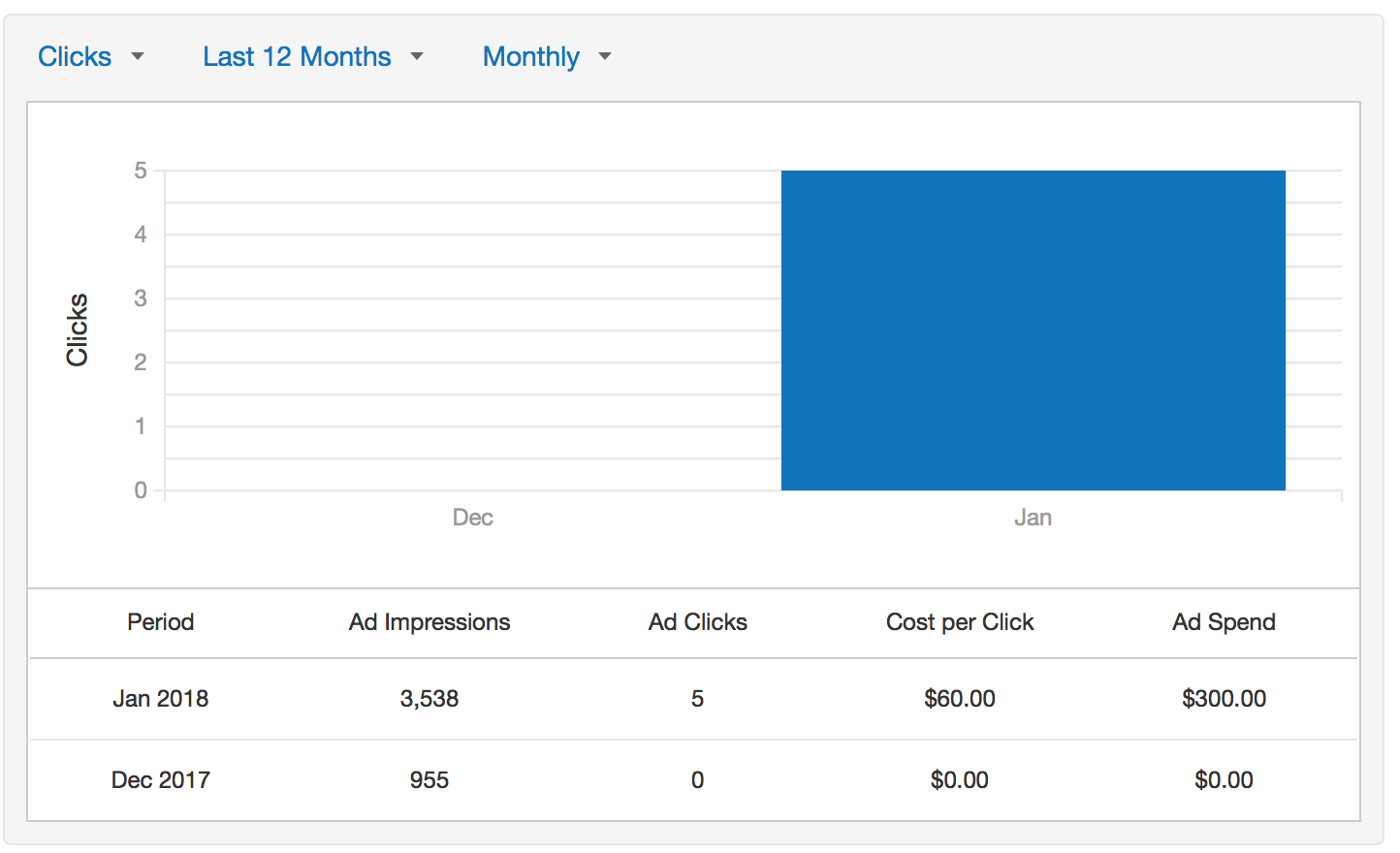 I just wanted to see that fact again, this time in proper titles with punctuation. Yelp somehow thinks there is value to my business in charging $60 per click. Wait… what constitutes a click? It certainly didn’t show up as very many visits to the site:

Okay well, $60 per click and $300 spent is no big deal right? It was all promo. Stopping the campaign now means we’re in the clear! $300 spent of their money no harm done. No benefit, no harm. Just in case (because I’m clearly suspicious at this point) let’s also remove the credit card from the account. Should be as easy as logging in, go to billing, and deleting card.

Of course you know where this is going. On Feb 1st we were greeted with a $96 charge from Yelp on the card I tried to remove. Rather than resolving it with Yelp I asked AMEX to block this merchant and started a claim to dispute the charge. I did eventually call Yelp and got exactly what you’d expect. No clear answer, no reasoning, no itemized list of the charges. When asked about how they figured out the $60 per click charge, the billing person of course has no idea how the ‘computers figure out the ppc cost’. Of course because she’s a financial expert, not a computer scientist.

End of the day I’m not going to stress too much about $100. I feel bad for the Yelp service agents who probably deal with this every day. They seem pretty crabby and I bet the turnover is sky high. Can’t feel good to know you’re screwing the folks you say you want to help. Goodbye Yelp. I never used you before and I’ll continue to never use you again.